It would be under statement to say that Harry Potter was my favorite series during my teenage years. Harry Potter was my LIFE – my parallel universe wherein I existed amongst the characters. It was my first ever hard core novel series which I followed with utmost passion and dedication, so much so my parents wondered whether I’m neurotic!

Having being introduced with the book series, for the first time on POGO Channel India, I took up reading it, after begging my school librarian to arrange me a copy. Did I mention our school library had only one copy of each book at that time? Since then, for the next eight years, I was a loyal Potterhead, following every book, movie and news which had HP scribbled over it. I even secretly wished an envelope dropped down whenever an owl passed above my head! Crazy Girl! 😬 I know…😇

From the ‘Philosopher’s Stone’ to the ‘Deathly Hallows’, each book is a masterpiece on its own. Raving and ranting about the book, the characters and the storyline here, is a total unnecessary requirement, because I am sure, there isn’t a human being who hasn’t heard of the series. But in my days, it was too huge to go unnoticed!

My most favorite character in the book was undoubtedly Professor Snape. And mind you, I’m not saying this now, because the world is mourning over the death of Alan Rickman (the actor who played it). Throughout the book series, I hated Prof. Snape. He was partial towards Slytherin, he was arrogant towards Harry and his friends, he looked for opportunities to insult and demean Harry. I hated Him! But still, deep within I always knew he would never hurt Harry. Somewhere I always felt there was a good side to him. All that faded when he killed Dumbledore at the Astronomy Tower! I had been in tears for two straight days, quitting food and sleep. I just could not handle that Snape could do that. Trust me, when I’m saying, if Prof. Snape was not fictional, I would have hunt him down and killed him myself. 😈

But hearing his story in Book 7, I was completely stunned! Snape taught the world that heroes can be found at the most unlikely places and at the most unexpected circumstances. He chose hatred over reverence, love over revenge, bravery over slavery and life over death! Even in the real world, not many can claim to do this! I have no words to describe the greatness of this fictional character and a much greater respect I have for the woman whose brains created this world! 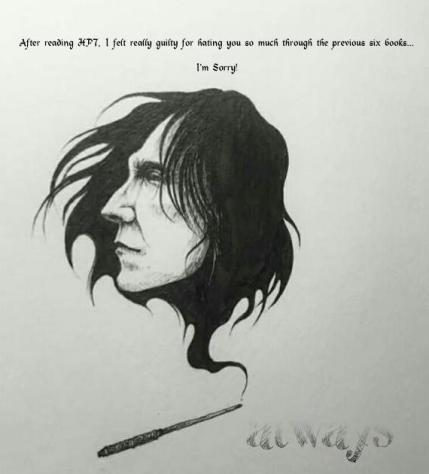 Today as the world remorses over the death of Alan Rickman, I couldn’t imagine anyone else who would have done justice to the most iconic character in the film history. Alan, unbelievably, brewed the right potion and stirred his magic into Professor Snape! The accent, the fluid motions, the eyebrow raises, the slow pauses mid sentence. Everything he did was exactly what I wanted to see. And so I went from adoring the character in my head, to the character on screen.

“Look…at…me…” he whispered. The green eyes found the black, but after a second, something in the depths of the dark pair seemed to vanish, leaving them fixed, blank, and empty. The hand holding Harry thudded to the floor, and Snape moved no more.”

When the world mourns over the loss of a wonderful actor, I secretly mourn over the death of the man who brought Prof. Snape to my life!

You will always be remembered by me as the man who gave ‘Bravery’ a new meaning!

Salut to the Harry Potter series! RIP Alan Rickman… You’ll always be dear to my heart!